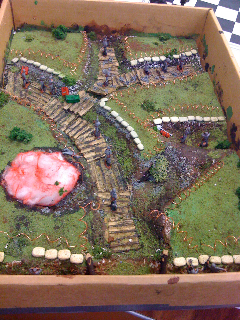 Here is the wonderful trench warfare diorama made and submitted by Alika. Thanks Alika for the great pics and the information on making a wonderful diorama!

Here is how Alika made this diorama:

The picture shows the diorama. It is 24" x 12" in size and made from polystyrene and sanded down, Clay was used for sand bags, fake grass, and fake bushes. I used copper wire to make the barbed wire. (all I did was wrap long copper wire around a stick like object to make loop effects). I used cotton for smoke/ explosion (would be better if I had put a bunch of dirt on cotton to make live effect), Card board was used to make the metal plates so infantry can easily walk upon, and other miniature accessories like shovel and ammunition box which came with my war hammer 40k. Figures are about 2.5 cm and painted.

Here are a couple more pictures of this diorama 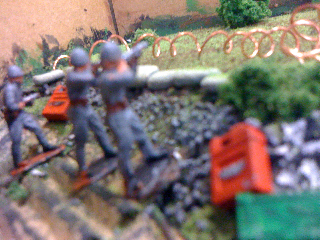 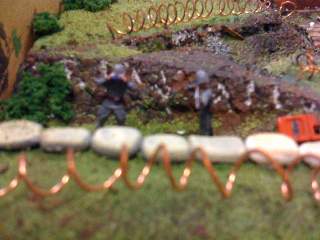 MORE TUTORIALS THAT WILL HELP

I also have some really nice tutorials on making trenches that you might want to check out. This is a video tutorial that shows how I make trenches out of cardboard. 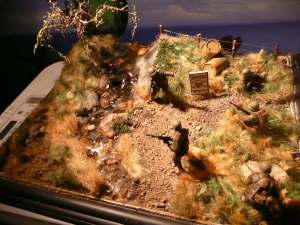 Here is some more great information with pics and techniques on making a World War II Diorama: 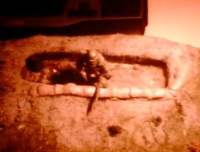 A couple of WW2 Dioramas submitted by a web visitor. Here are two videos with tips on making a WW2 trench like the one shown in the pic and a diorama with a Tiger tank. WW2 Diorama stuff 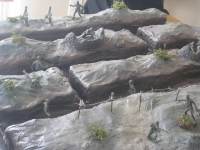 Here are some pictures of a complex series of trenches that a web visitor made (Alec R. ) Complex Diorama Trenches for a war scene